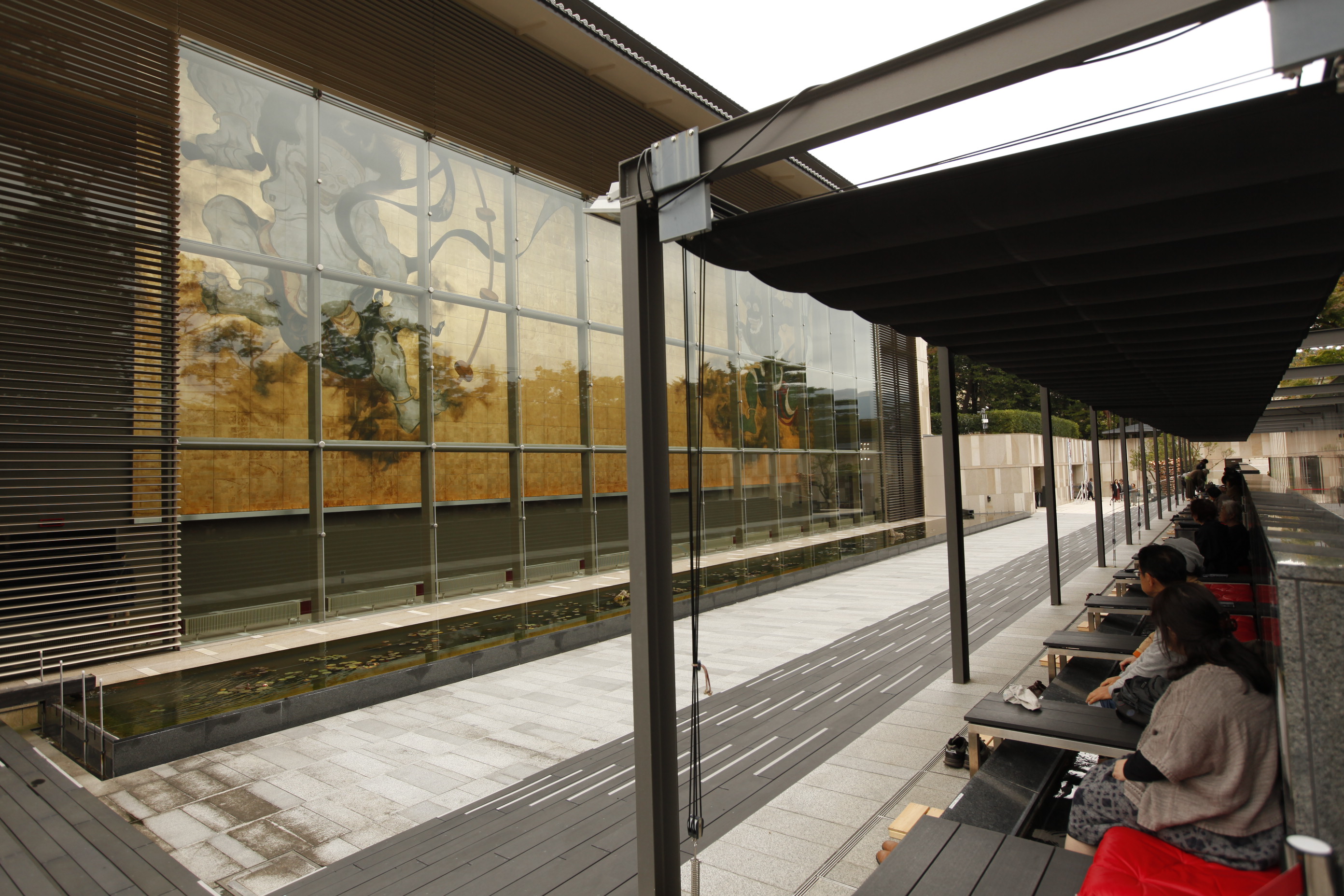 The Okada Museum of Art opened its doors in Kowakudani in October 2013. With five floors covering 5,000 m2 of exhibit space, it is the largest museum in Hakone!

The museum was founded to carefully preserve works of art that have been handed down over the generations in Japan and share the pleasure of encountering beauty, with the hope of conveying this inheritance on to the next generation. The museum’s collection focuses on Japanese, Chinese, and Korean works of art, with paintings and ceramics from antiquity through to modern times arranged and exhibited by theme.

Immediately upon entering you will be overwhelmed by the massive “Wind/Time” mural that decorates the hall. It is the work of Fukui Kotaro and depicts the gods of wind and thunder, a theme passed down by the Rinpa school of Japanese painting. Unbelievably, it is 12 meters high and 30 meters in length. It is said to have taken five full years to create, from concept through to completion.

In fact, it is so large that it is difficult to view the mural in its entirety from within the museum. There is a separate spot from which visitors can fully appreciate the mural to their heart’s content (continue reading for more details).

Coming to the end of the passageway with the mural, visitors can view the “Chinese Ceramics, Bronze Works, and Korean Ceramics,” “Japanese Ceramics,” “Japanese Paintings,” and “Buddhist Art” exhibits floor by floor. One can easily move between floors by either elevator or escalator. As a museum whose exhibited works are comprised primarily of pieces from private collections, a surprising number of around 450 pieces are on display at all times. The museum’s exhibits also contain important cultural properties, such as a seated wooden statue of Yakushi Nyorai (Bhaisajyaguru in the original Sanskrit), the Buddha of medicine and healing. With five floors, there is much that is worth seeing.

There are also many special exhibitions, with “Ninsei & Kenzan ― Ceramics and Paintings in Kyoto” currently on display through April 1, 2018. This exhibit features a complete display of all items in the museum’s collection by the two great Kyoto potters representative of the Edo period, Nonomura Ninsei and Ogata Kenzan, and it includes important cultural properties. In addition, paintings by Kenzan’s elder brother, Ogata Kourin, and others are also on display in conjunction with this special exhibit.

The next special exhibit, which is planned for April 4 – September 24, 2018, will be “Tanaka Isson: A Proudly Independent Painter who Loved Amami” in honor of the 110th anniversary of Tanaka Isson’s birth. In recent years, the museum has publicly exhibited works by artists such as Tanaka Isson, whose popularity has been rising, and his contemporary, Higashiyama Kaii, as well as by Ito Jakuchu, who is said to be their non-contemporary rival. A special exhibit to commemorate the fifth anniversary of the Okada Museum of Art’s opening is also planned from September.

A wilderness during the Edo period, Kowakudani was developed at the start of the Meiji period. Inns and hotels were built, and they say the “Kaikatei”, a hotel designed for Westerners, existed in the spot where the Okada Museum of Art stands today.

Today an extensive Japanese garden of approximately 12,000 square meters spreads across the grounds, with waterfalls and ponds scattered amidst a natural forest. The fresh growth in the spring and the colored leaves in the autumn present particularly stunning views. At the Okada Museum of Art, visitors can enjoy the flora that serves as motifs for the art after appreciating the works of art themselves. You can also just visit the garden (garden only tickets: ¥300).

The Kaikatei restaurant, named for the hotel of yore, is also located at the entrance to the garden. A renovated Japanese-style house from the early Showa period, the Kaikatei is an elegant structure. Guests can enjoy their meals while gazing out over the garden.

One more thing the Okada Museum of Art is known for is its Footbath Cafe. The museum has an open-air foot bath where one can take in a view of the mural introduced above and also enjoy coffee and other cafe items. Amazingly, anyone can visit the Footbath Cafe, even if they aren’t a museum visitor! (Tickets for the foot bath are 500 yen. Museum ticket holders admitted at no charge.)
The hot water for the foot bath comes entirely from the source of a natural spring found within the museum grounds. It is pure alkaline, which beautifies the skin. Even with just your feet in the water, foot bath visitors will find they become comfortably warm all over. Why not take a break while enjoying a view of the beautiful mural after having tired yourself out from walking around Hakone sightseeing?